We are proud to have worked on a number of design projects for Château de Gudanes including silk scarves, festive calendars and stationary.  Rich in decorative detail, from the grand 18th century salons through the 19th century medieval-styled chapel to the 15 th C hall and down to its ancient kitchens, the Château tells the stories of its past.

Bindy attended the inaugural restoration workshop there, in July 2015 and has since researched and faithfully translated some of the many design references. 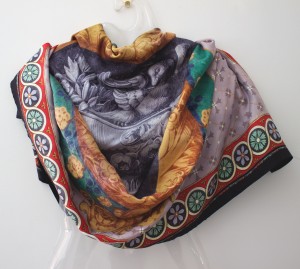 Border and background designs for the Dove and Les Glaces scarves were derived from the Château's chapel.  Medieval in style it was likely decorated in the 19th Century.  The motif central to the  Dove scarf was derived from 18th C wallpaper that hung in one of the second story salons.

Les Glaces came about through a bit of serendipity while designing The Dove of Peace Scarf for Château de Gudanes.    We loved them so much we decided to produce them on 100% silk georgette as a scarf that can dress up a pair of jeans or a little cocktail dress equally well.  Available from the Château's Online Boutique are the 'Les Glaces' silk georgette range in multi and single colours. 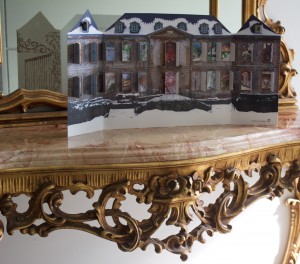 Our concept and development of the first Chateau Advent Calendar, produced in 2015,  gave much joy to those who discovered the magic behind each window.  We contributed to the 2016 calendar and have loved to see ongoing releases. 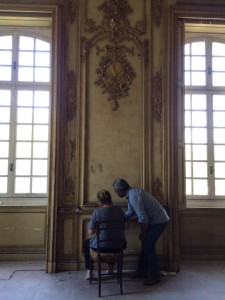